Being a politician probably used to be a bit of fun. You had money, power, responsibility, and respect.

Now though, it seems more likely that the newspapers hate you for being rich, half of your job is just apologising on TV for everything being broken before you arrived, and any teenager doing Media Studies can cancel out your entire reputation and legacy in the public imagination overnight with a cruelly observed blog that lists every photo of you where you look a bit like a butternut squash. 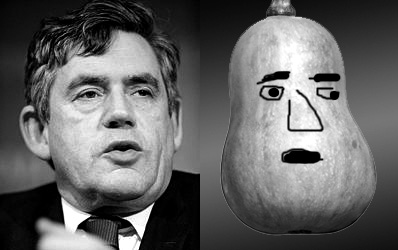 However, if you still think it could still be the career for you, here’s some tips to help you navigate the well-laid minefield of the modern media.

This is not The King’s Sp-Sp-Sp-Speech any more. You can’t really go around stuttering like a dictaphone dropped in a toilet, otherwise some entrepreneurial internet anonymoid will paste you all over YouTube as a dubstep remix.

The Electorate can smell weakness from a mile away, so if you want their Votes, Taxes and Livelihoods in your hands, you must act at all times like you’ve just kicked an angry wolf’s face off before you enter every room, and are quite ready to do it again.

The internet is now the permanent historical record of your entire public existence. Unfortunately for you, though, it is not your past work as a Cluster Manager for Regional Fitness in Swindon or your wonderful new policy ideas that will ‘go viral.’ You’re not going to rank highly in our Search Engine Optimised world for your sub-committee consultation’s suggestion to redraft the bill proposal amendment to the 1884 Everybody Falling Asleep Immediately What Are You Even Talking About Act.

If, however, you stumble over a blind dog and knock an old lady into a novelty over-sized pie, guess who is going to the make the Internet o’clock news? That’s right. You, you big clumsy.

Every time you misspeak, or trip up a step, or push a door that says pull, or fall out of a car on to a roadside kebab, basically every single person in the country is going to YouTube their Twitters all over each other’s Facebooks, and those zeros-and-ones of gaff-data are going to be permanently stored on servers all over the Earth, and probably also in space, forever.

Indeed, you can only make about two or three embarrassing blunders before you are completely unelectable. That is until you reach 400 of them, of course, at which point you become eligible to run for the Mayor of London. 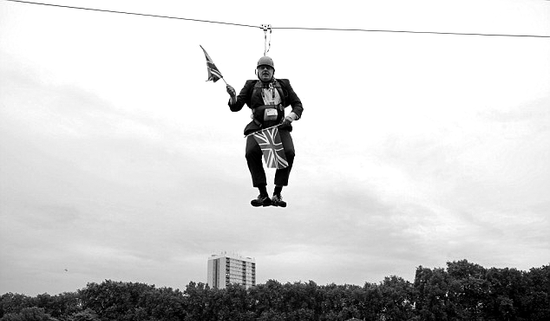 If you go around telling everyone and their electorally-registered mothers that you’re going to build ten schools, that’s generally what they are going to expect, isn’t it? Silly rookie. What you need is a bit of wiggle-room. Instead of offering to build ten schools or something else unhelpfully specific, it’s smarter these days to offer ‘improved education,’ without specifying a single definition, parameter, number, direction, concept, axis, flavour, or list of stages that could be measured relative to anything in the observable universe relative to a budget or space-time.

When people ask for results, then, nobody can really complain when you wheel out some boy called Bob with bits of chicken on his face who can now spell his name with less mistakes than last week.

Today, democracy is no longer a hundred men who meet once a week to discuss poor people while they chase a fox on inherited land.

Instead, its a big country-wide party where anyone is allowed in as long as they’re tall enough and haven’t yet murdered someone. Unfortunately for you, this means a lot more people are now involved in governance, who are less experienced with debate/consensus, and a lot more experienced with noise/throwing.

Luckily, dealing with projectiles is a skill now taught at all good Politician Schools, at a range of expertise levels:

You’ve been invited on to some light-hearted morning chat show to be interviewed by a dead-eyed rent-a-couple, who want to talk to you about your kids, your holiday, your breakfast ritual, and your CD collection. What a great opportunity to score some voters! It’ll be like playing a game of tennis with a child in a wheelchair. “So, Mr Prime Minister, we have to know,” says the woman one, “do you think that Kate was right to wear that dress at that event?” Hm. What do most people think? Say that now. SMASH! ANOTHER ACE!

In a sudden, unexpected twist of skewer-point journalism, the white-haired man one puts on that YouTube video of you stuttering, which some 12-year-old internet japester with autism has turned into a dubstep remix.

They play the video on a television in front of you while a little thumbnail of your reaction is broadcast to the nation. The show’s producer is loving it. It’s light-hearted. It’s whimsical. It’s a complete fucking nightmare.

You have to laugh, though. HAHAHA.

WHOOMP WHOOMP BWOOOOAR, goes the dubstep. STUT-STUT-STUTTER, goes your dumb mouth, all over the internet, forever.

You have to laugh, though. HAHA HA HA. THAT’S VERY FUNNY, ISN’T IT.

YES, AREN’T WE ALL HAVING A NICE TIME. 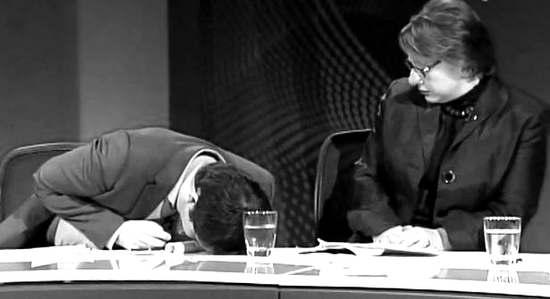 Once upon a time, it may have been acceptable to be so utterly boring and bookish that people trusted you to deal with laws, trade and taxes exactly because you seemed duller than them. It was even regarded as vaguely in the nation’s interests to avoid electing the ‘common man,’ you know, in favour of the kind of uncommon man who wouldn’t get immediately distracted by a novelty sandwich fight, unlike the rest of us. 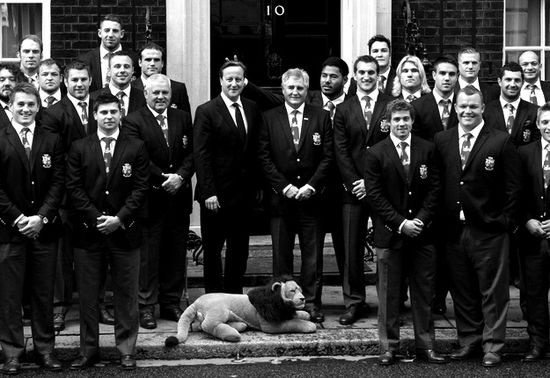 The “rest of us” think you’re a bellend basically

Now, though, people want to know their politicians much more intimately, and judge them not on boring, arbitrary abilities like, ‘how well do you understand the economic concept of the Division of Labour?’ or ‘can you do the job?’ No, now electability is based on your answers to more sympathetic or relatable questions like, ‘who do you want to win series 49 of Big Brother?’ and, ‘what do you prefer? Sausages or The Arctic Monkeys?’

In other words, are you one of us?

You’re not, of course, which is why 90% of your life’s trajectory has been to rule the chumps. To prevent them figuring this out, though, don’t forget to mention that you like burgers, West Ham Aston Villa, the environment, and Insomnia by Faithless.

Also known as Spin Doctors, or Communications Directors, or Media Strategy Managers, or Opinion Fact Rearrangement Consultants, it doesn’t really matter what you call them, as long as you have someone who is so deeply networked with producers, editors and journalists that they can trade access to you for not ruining you. If a camera or microphone is ever within a meter range of your opinions, this media-savvy individual should be fifty centimetres closer, ready to whisper the sweet populist nothings in your ear, hand-hold you through the no-man’s-land of the media war, and be prepared to spring to your defence should some unflappable, underpaid nurse suddenly desire your attention, like a bodyguard leaping in front of a bullet made of proletarian rage.

Behind the scenes, this individual should spew so much rubbish from their mouths, at all times, in all journalistic directions, that every time they formulate a sentence they break the Kyoto Protocol.

Obviously, politics is about compromise. There are direct winners, direct losers, and the majority of people who don’t know who’s playing because the election doesn’t take place directly between their face and the television.

The formula for getting continually re-elected, then, is simple: the group of ‘winners’ must be numerically greater than the group of ‘losers.’ Simple. Generally, the winners are going to vote for you, the losers are not, and everybody else will choose by asking George Clooney.

Very popular people are your friends, and you agree with all of them. 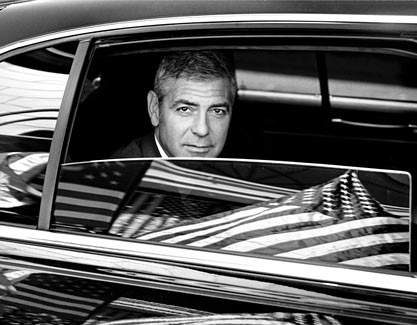 Women want to see his election

You might avoid your taxes, you might use those tax savings to kill horses for fun, and you might insist that your favourite one-liner comedian Jimmy Carr comes around to your house to enjoy some frugal tasty horse meat burgers. We all have hobbies. However, if you then find out The Sun newspaper is suddenly, completely outraged that Jimmy Carr ate tax-free horse-meat, you better be damn well suddenly, completely, publicly outraged too.

HOW COULD HE?! THE MONSTER!

The days of looking like some haunted old coodge loitering around the buffet of a binman’s funeral are long over. It’s the age of the colour television, and the eyes of the masses demand more. 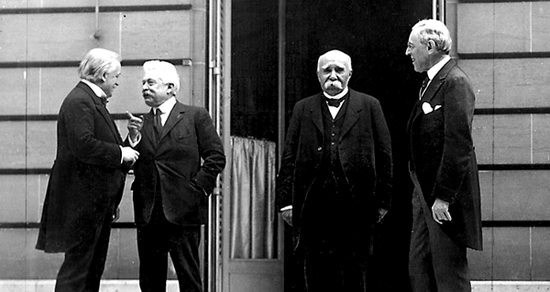 Indeed, it’s democratically safest to be a half normal, half bland cocktail of ‘the everyman.’ Almost young, almost trim, and almost, almost relatable to ‘the everyman,’ except that everything you know about the working class seems suspiciously like it was assimilated through hiring them to clean your windows. In terms of facial personality, you should look exactly like the kind of person who would be impossible to pick out of a police line-up, unless all of the other suspects had the kind of faces you could make documentaries about.

With boring, podge-head in place, you must then master ‘Blair hands.’

This is where you spend your entire speech looking like a forgettable market stall owner who is presently indecisive about where exactly to display his favourite invisible melon.

While it’s not like some minor drug hypocrisies will stop you getting a post like the President of the United States, political life will always be a little smoother if you can pretend you are a good, honest person.

Get your spouse to behave in public, hide your most smashed and impulsive relatives somewhere safe with a sneaky pay-check, avoid pool parties, low-priced prostitutes, poor people, and, if at all possible, try to mechanically scare big, wide smiles on to your children’s little faces whenever there is a camera within a mile of your house.

“Not as much as Sausages, though, eh Timmy? HAHAHA. Eh? Eh?

You - a guide to your weird, incredible cosmic existence