Blomp and Whizzo the Wonder Kid

There are two versions of you.

One of them is you, now, the one who’ll go to bed tonight and set an early alarm for tomorrow in a sleepy blur of good intentions. Let’s call this version of you Blomp.

The other version of one is the potential you, later, the one who will wake up in all the magic possibilities of tomorrow, next week, or somewhere down your timeline in a golden future not yet written. He is the absolute best version of you; the one who can be spotted on job applications, first dates, and at high school reunions. He exists almost entirely as glimmering and untapped potential in some deluded hangover of today. Let’s call this version of you Whizzo the Wonder Kid.

You know these two characters well. 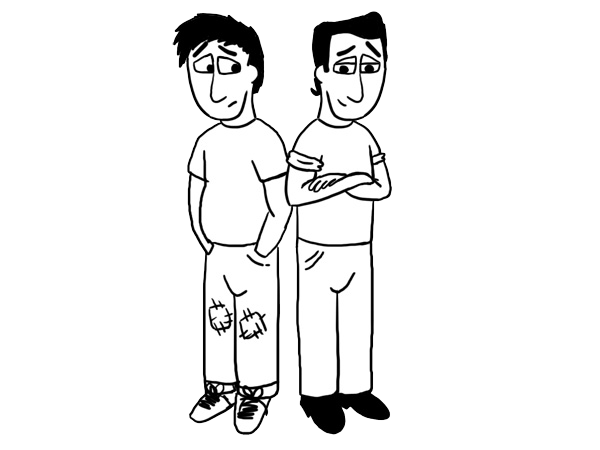 Whizzo the Wonder Kid is the guitar-playing vegetarian who goes running three times a week; Blomp, meanwhile, has bidded on a guitar on eBay, and learnt the A-chord. Well, he’s going to learn it. Soon. Just after a pre-jog nap, or a bath, or a bath-nap, or a sit down, or a pre-bath sit down nap. Actually, maybe he’ll go jogging tomorrow. Yes, tomorrow. Jogging and vegetables. Today is more like the kind of day where one should really stay in, and eat a whole cooked chicken on a stick. Fine.

While Whizzo the Wonder Kid speaks fluent Spanish, Blomp has only so far bought the language tapes, listened to half of Basic Foundation Bits To Annoy Trilingual Waiters Part One, and fallen asleep with the earphones down his pants.

Whizzo the Wonder Kid calls his mother more, replies to e-mails immediately, and asks out pretty girls on the Metro whenever, because, well, why not? Blomp, however, presses ‘Mark Unread’ on any message he can, literally, and any girl he can, metaphorically, and will continue to do so until he’s had one more coffee, or one more beer — Whizzo the Wonder Kid will sort it out anyway when the caffeine or the courage kicks in.

But here’s an idea worth considering: Whizzo the Wonder Kid is sometimes just a story in our heads, and that story, however exciting it becomes when we splash it with colour to impress people, does not have any real effect on the rest of the universe because of a simple but relatively ignored little truth:

We are only what we do.

We are, and might only ever be, Blomp, whatever shape that is today.

Every time you turn off your alarm and sleep another hour, you are a person who turns of their alarm and sleeps another hour. It isn’t a bad thing, or a problem, or a habit that needs to be fixed, but it is as simple as that. Excuses are fine, but they will always be irrelevant to the results recorded in everyone’s shared reality.

“But it’s only because it was raining.”

“But it’s just because I went to bed late last night.”

“But it’s only because I plan to get up earlier tomorrow.”

OK. Great. Fine. You slept in; no biggie, but that is the only fact objective fact of the situation – now you gotta work with it. You are not the person who lives in your head, you are the things that you do. Did you turn off the alarm? OK. Did you spend two hours browsing nonsense cat websites rather than practising Spanish? OK. Did you have a kebab rather than a salad? Hey. That’s cool. I’m not your Aunt Sally, judging you because you didn’t shave before the funeral. But what are you telling yourself?

That you can get up earlier, practice Spanish more, and cut down on kebabs?

In your head, are you slightly more like Whizzo the Wonder Kid?

Where this attitude can become dangerous, I think, is when we start telling people about all the things we are going to do, when we’re not actually doing them. It is much quicker and easier, after all, to enjoy the ‘I could do that’ narrative, than the sometimes more real, objective one: ‘I have talked about doing that for a very, very long time, and told people I could do that, while never, ever doing that.’

Whizzo the Wonder Kid sometimes picks the juicy, quick rewards of congratulation for the things Blomp hasn’t done yet. He is a lazy short-cut to a quick fix of ego-boosting, and that makes him addictive. Blomp is a balloon, bloated from unearned prestige, and Whizzo the Wonder Kid is the air that escapes his rubber-slappy lips every time he creates the expectations that make it tougher for Blomp to ever do those things in the first place.

When we tell people about the impressive things we are going to do, it’s a form of self-marketing. And when it comes to ourselves, just like with any other product, our advertising can be true, or it can be false – and that might not affect people making their first purchase of our product with a quick, flashy trick, but it will affect every ‘sale’ after.

Fool me once, shame on you. Fool me two times… err… um… we’re not going to get fooled again.

Indeed. For many years, I believed I could do all kinds of wonderful, incredible things IF I WANTED TO. In the silliest version of my future, I’ve written novels, plays, movies, whole albums of music on instruments I can’t even play, ran marathons, climbed mountains, swam channels, invented things, lived on boats, on islands, on cattle ranches, in large cities, small villages, up mountains, beside lakes, with a hundred different girls, and with none at all.

I used to tell myself this kind of deluded mantra: with just the right time, or money, or motivation, or incentive, or blood caffeine level, or whatever flavour of excuse tasted best that day, I could do ALL OF THE THINGS… just… not… right… now. Tomorrow looks good, though. Yes. Tomorrow will definitely be different than today was.

People do not pay, hire, befriend, or date our potential. If they did, we’d all be hot property. My Whizzo the Wonder Kid, indeed, has done more things than it is possible to do in one human lifetime, and that was starting to become a problem.

I may be ambitious, but I’m also –more realistically– a lazy sort of a sausage.

I found it incredibly helpful to realise something quite obvious: that I can’t do all of the incredibly ambitious things really. Even if my potential was somehow infinite, my time and resources are definitely not. My grandest ambitions may be somewhat honest (I really do want to have done them, after all), but I will never do most of them, because the time they take will always be in competition with a hundred other unpredictable demands and desires for my time and my internet-ruined ADHD levels of attention.

All of the most difficult, hardwork-chisselled things I’ve done in the most outrageous Whizzo the Wonder Kid version of ‘my future’, for example, are made spectacularly unlikely by my excessive and greedy fondness for lazy mornings, impractical friendships, unearned holidays, outrageous baths, accidental naps, vigorous booze sampling, and near-constant levels of incredible faffing.

In other words, the smug novel-writing, vegetarian, exercising, ultimate bilingual rock star thing-doer is a version of me that gets up earlier, works harder, writes more, gets distracted less, procrastinates less, concentrates on just one thing rather than a dappy fan of too many things, and reaps all of the rewards of that focussed streamlined future lifestyle.

In summary, then, he is the opposite of me. An entirely nonsense dream personality that doesn’t take into account every year of evidence previously provided that I am not that person. It’s a version of me I can believe is coming tomorrow, but only if I can keep religiously ignoring the fact that he was supposed to arrive yesterday.

It can be the ultimate procrastination in terms of improving yourself, because the map isn’t useful until you know where you are starting the journey.

I’m lazy sometimes, I get distracted, I makes excuses, I nap, I procrastinate, I fail. I’m not very good at quite a lot of things, but I do practice, I do try a little, and I do try to try more – and that’s how I get better. That is who I am, and I’m much happier knowing there is no imaginary gearbox is my head that I can one day magically shift up a gear.

Blomp is who I am, and he’s fine as he is. How about you? 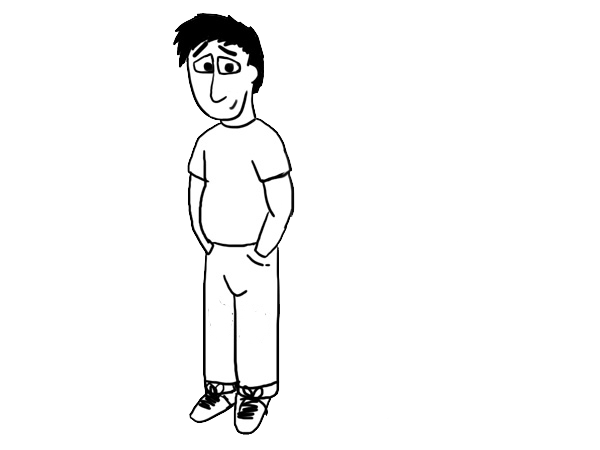 The Optimist's Guide to... Embarrassment