The Bloody British: A Well-Meaning Guide to an Awkward Nation, 2019

I have a First-class BA (Hons) in Scriptwriting for Film and Television, which is a real thing that you’re actually allowed to study in modern life (what a world). I have written everything from script treatments to series bibles, and every sensible length of screenplay in between, from short films to feature-lengths. If you’d like to learn more about my scripts, please contact me.

A feature-length comedy film about Donald, a quantum physicist in the midst of an existential crisis, and all the usual inconvenience and confusion that comes to day-to-day life when identical clones of yourself start turning up at your house every day and instantly dying upon eye contact.

A feature-length CGI comedy adventure that promises to take (im)mature audiences on a microscopic tale of epic proportions.

An animation concept for young children about a giant called Burr who gets increasingly little the further he goes from home.

How to Deal With Adulthood – Book Preview

Writing a CV / Having an Interview / Commuting / Filling out Forms 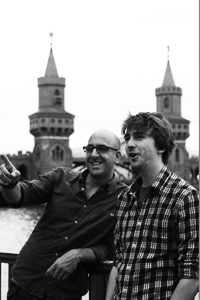 This nice bald man is my friend. Sometimes we write things together, for fun, or money, or both, or neither. We’ve even co-authored a comedy book together about the best German words and phrases that the English language should adopt, which you can buy here.

As Amazon slugs it out with the big publishers, authors are left cowering, The Guardian, June 30th, 2014

Six genius German words and idioms we should be using in English, Matador Network, July 2nd, 2014

Love, Muesli, and Nigeria: How the Internet Changed Everything, Venture Village, May 7th, 2013

Ideas are like children: most of them are horrible, Venture Village, April 2nd 2013

How to be English – 10 Ways to Indulge your Inner Anglophile, Venture Village, December 10th, 2012

(If you think you would prefer to be spending time with Adam Fletcher right now instead of me, you can find him here.)

How to be a… Stupid Tourist / Office Worker / Modern, Media-Savvy Politician

Lists: Top 10 Reasons to Maybe Not Have Kids, Yeah? / 7 Stupid Ways to Optimise your Mornings (if you hate them)

My Neukölln Neighbours, and the Quest for the Magic Internet, überlin, March 24th, 2013

The Most Unbelievable Photograph of All Time? – A Rant about Wyclef Jean

Imagine 2.0 – The 2016 version of the classic John Lennon song, as interpreted by Donald Trump

When Culture and Copyright Collide – an academic thesis that explores the difficult relationship between intellectual property and the distribution of media in the digital age. Is file sharing really killing the film industry? (2009)

How to Vote, if You’re a Human Being (Brexit, Trump and the Future of the Species), Medium,  June 2016

You Don’t Own You, Moot Magazine; Sex and Politics Issue, July 2012